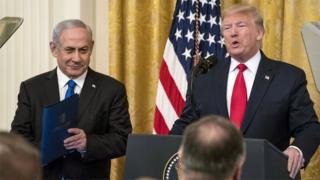 US President Donald Trump has unveiled his long-awaited “vision for peace, prosperity and a brighter future for the Israelis and Palestinians”.

Israel’s prime minister called the plan the “opportunity of the century” and said he was willing to endorse it as the basis for negotiations with the Palestinians.

But the Palestinian president dismissed the plan as the “slap of the century”.

So what is Mr Trump proposing on core issues that divide the two sides?

The Palestinians have long sought to establish an independent, sovereign state in the West Bank, including East Jerusalem, and the Gaza Strip, which were occupied by Israel during the 1967 Six Day War. Israeli prime ministers have previously accepted the notion of a Palestinian state existing alongside Israel.

The White House said Mr Trump’s plan offered “a viable path to Palestinian statehood”. It “designates land reasonably comparable in size to the West Bank and Gaza for the establishment of the State of Palestine” and would “more than double the size of the land currently used by the Palestinians”.

Israel has agreed to a four-year “land freeze” to secure the possibility of a two-state solution, according to the White House. Mr Trump said that during this time, when the land allocated under his plan for a new Palestinian state would “remain open and undeveloped”, the Palestinians would be able to study the deal, negotiate with Israel, and “achieve the criteria for statehood”.

Mr Trump said the criteria included “adopting basic laws enshrining human rights; protecting against financial and political corruption; stopping the malign activities of Hamas, Islamic Jihad, and other enemies of peace; ending the incitement of hatred against Israel; and permanently halting the financial compensation to terrorists”.

The Palestine Liberation Organisation (PLO) said the US plan “recognises Israel’s illegal colonisation and annexation of occupied lands belonging to the State of Palestine”, while Israeli human rights group B’Tselem warned that Palestinians would be “relegated to small, enclosed, isolated enclaves, with no control over their lives”.

Both Israel and the Palestinians hold competing claims to the ancient city. Israel – which occupied the formerly Jordanian-held eastern part in 1967, and effectively annexed it in 1980 in a move not recognised internationally – regards the whole of Jerusalem as its capital.

Palestinian leaders want East Jerusalem – which includes the Old City and major Muslim, Jewish and Christian holy sites, and is home to about 350,000 Palestinians and 200,000 Jewish settlers – to be the capital of a future Palestinian state.

Mr Trump’s plan says: “Jerusalem will remain the sovereign capital of the State of Israel, and it should remain an undivided city.”

It adds: “The sovereign capital of the State of Palestine should be in the section of East Jerusalem located in all areas east and north” of Israel’s West Bank barrier, including Kafr Aqab, the eastern part of Shuafat, and Abu Dis.

Palestinian Authority President Mahmoud Abbas, who broke off contacts with the Trump administration in 2017 when it recognised Jerusalem as Israel’s capital, insisted that a Palestinian state without East Jerusalem was impossible. “Jerusalem is not for sale,” he said.

Mr Trump’s plan also says Israel will “continue to safeguard Jerusalem’s holy sites and will guarantee freedom of worship” for people of all faiths.

The plan proposes that the “status quo” at the key holy site in Jerusalem known to Jews as the Temple Mount and al-Haram al-Sharif to Muslims is preserved.

The Palestinians insist on borders based on ceasefire lines which separated Israel and East Jerusalem, the West Bank and Gaza between 1949 and 1967.

Israel says those lines are militarily indefensible and were never intended to be permanent. Its leaders have not previously said where the borders should be, other than making clear that the eastern border should be along the River Jordan.

The White House said it “reached an understanding with Israel regarding a map setting forth borders for a two-state solution”. A joint committee will be formed to “convert the conceptual map into a more detailed and calibrated rendering so that recognition can be immediately achieved”, according to Mr Trump.

The president’s map showed 15 Israeli “enclave communities” – currently Jewish settlements in the occupied West Bank – that would be located inside the future Palestinian state and be connected to the rest of Israel by access roads.

In exchange for letting the settlements remain, the Palestinians would be given territory in what is now Israel that adjoins the West Bank, as well as two large enclaves in the Negev desert, near the border with Egypt, connected by road to Gaza. Gaza itself would be linked to the West Bank by a tunnel.

Since 1967, Israel has built about 140 Jewish settlements in the occupied West Bank and East Jerusalem, as well as 121 outposts – settlements not authorised by the government. They have become home to some 600,000 people.

The settlements are considered illegal under international law, though Israel disputes this. Palestinians say all settlements must be removed for a Palestinian state to be viable. Mr Netanyahu has vowed not only to never uproot any settlements but to bring them under Israeli sovereignty.

The White House said that “neither Palestinians nor Israelis will be uprooted from their homes”. Mr Trump said the US would “recognise Israeli sovereignty over the territory that my vision provides to be part of the State of Israel”.

Under Mr Trump’s plan, Israel will “incorporate the vast majority of Israeli settlements into contiguous Israeli territory” and “Israeli enclaves located inside contiguous Palestinian territory will become part of the State of Israel and be connected to it through an effective transportation system”.

Mr Netanyahu told reporters that the Israeli cabinet would vote on Sunday on whether to start the process of applying Israeli sovereignty to the settlements, and to parts of the Jordan Valley allocated to Israel under Mr Trump’s plan.

The Jordan Valley is a fertile strip of land running along the border with Jordan that makes up almost 30% of the West Bank. It is sparsely populated – home to around 65,000 Palestinians and 11,000 Jewish settlers. Palestinians say the valley would form an integral part of the land that they want for a future state.

Israeli leaders see the Jordan Valley as a vital security buffer with the Arab world and have held that Israel would maintain some kind of military control there under any peace deal with the Palestinians. Mr Netanyahu has promised to apply Israeli sovereignty in the Jordan Valley and the northern Dead Sea.

Mr Trump’s plan states: “The Jordan Valley, which is critical for Israel’s national security, will be under Israeli sovereignty.”

The United Nations says it supports 5.5 million Palestinian refugees in the Middle East. Most are the descendants of people who fled or were expelled during the Arab-Israeli war that followed Israel’s declaration of independence in 1948.

Palestinians insist on their right to return to their former homes, but Israel says they are not entitled to, arguing that such a move would overwhelm it demographically and lead to its end as a Jewish state.

The White House said that under Mr Trump’s plan, “Palestinian refugees will be given a choice to live within the future State of Palestine, integrate into the countries where they currently live, or resettle in a third country”.

The US will work with the international community to establish “a generous trust to aid in the process of resettling refugees”, it added.

Israel insists any peace deal must include Palestinian recognition of it as the “nation-state of the Jewish people”. Without this, it argues, Palestinians will continue to press their own claims to the land, causing the conflict to endure.

The Palestinians say that what Israel calls itself is its own business, but that to recognise it as the Jewish state would discriminate against Israel’s Arab population of Palestinian origin, who are Muslims, Christians and Druze.

Mr Netanyahu has said any Palestinian state should be demilitarised with the powers to govern itself but not to threaten Israel.

Mr Abbas has expressed support for a demilitarised Palestinian state and proposed that an international force patrol it indefinitely, with troops positioned at all border crossings, and within Jerusalem.

Mr Netanyahu said the plan would give Israel “a permanent eastern border to defend ourselves”.

He stressed that the Palestinian militant group Hamas, which controls the Gaza Strip and has fought three wars with Israel since 2008, would be disarmed. Hamas said the talk of it disarming was “delusional”.