One of my last restaurant meals before the shutdowns started last year was at Swan Oyster Depot in San Francisco. I waited on the street by a fishy-smelling puddle until I was waved toward a seat at the well-worn counter.

Crushed between two strangers on a wobbly stool, I happily ate as much fresh, sweet, cold Dungeness crab meat as I could. Happily, because the server across the bar was making me feel comfortable and cared for, safe and unhurried, though I can’t say exactly how he did this.

Unlike service, which is technical and easy to describe, hospitality is abstract, harder to define. It can’t be summed up in a checklist. It can’t be bought. It doesn’t hinge on the quality of the glassware, or the folding of a napkin while you’re in the bathroom. And it can’t be eroded by a slightly-longer-than-you-expected wait, or other little inconveniences, like picking a piece of crab shell off your tongue.

Hospitality is both invisible and formidable — it surrounds you. You can find it at a rest stop on the highway, and miss it at the host stand of a fine-dining restaurant. You feel its presence, or you don’t. 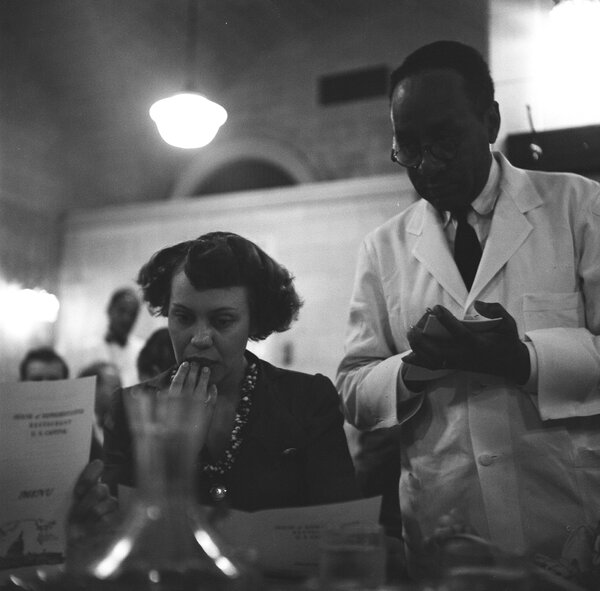 But what is it? As chefs, owners and restaurant workers rebuild the hospitality business, the question has become less theoretical, and more urgent.

At the kinds of seminars where successful people share the secrets to their success, the New York restaurateur Danny Meyer has talked about measuring what he calls the “hospitality quotient” of his staff.

HQ, as his Union Square Hospitality Group calls it for short, is a way of measuring aspects of a worker’s emotional intelligence. The group claims that it helps determine whether she’s the kind of person who feels good by making other people feel good. In other words, if she’s suited for the hospitality industry.

Mr. Meyer has said hiring people with kindness and optimism, curiosity and empathy, self-awareness and integrity — all markers of a high HQ — is part of his company’s competitive advantage.

It’s not an exact science, but a team of professionals with these traits can create a kind of magic in the room, a feel-good atmosphere of relentless positivity. Keenan Steiner, a former server at one of Mr. Meyer’s restaurants, once called it “the house of yes.”

Variations of this approach have defined American hospitality for decades. Maybe because it’s such a seductive idea — that not only is the customer always right, but that the people working in restaurants are somehow called to serve them, and find joy in it. That hospitality is what they give, and that it belongs to the paying diner.

“Maybe it’s generational, maybe it’s cultural, but my parents taught me that you can be sad inside, but you have to be thoughtful and not let people take on those burdens,” said Minh Phan, the chef and owner of Porridge & Puffs in Los Angeles. “It’s so deeply ingrained in me, and maybe that’s what hospitality is.”

Like many chefs in the pandemic, she saw burnout among her staff, who were worn down by the physical and emotional labor of serving and cooking through lockdowns — crying, stepping away from the line, struggling for a better work-life balance. Ms. Phan blames herself for continuously pushing the team to work harder, even as the challenges grew.

“Now I’m asking myself, how do I make this business sustainable for other people?” she said. “Using passion as fuel is not sustainable, but the problem is, I don’t know what the new model will be.”

No one does, but after an exhausting year, chefs are seeing the fragility of the business, and the vulnerability of their workers, more clearly.

“I served at my restaurants for years, but I didn’t recognize how one-sided it was,” said Amanda Cohen, who runs Dirt Candy in New York. “Until I was out at those tables this past summer, feeling afraid to ask people to put their masks on.”

Diners challenged the restaurant’s safety protocols, either refusing to put on masks, or doing so with an attitude, and only when asked repeatedly. “I was feeling so disenfranchised and powerless, even though I knew I had the power,” said Ms. Cohen, the restaurant’s chef and owner. “Servers struggle with this all the time.”

Ellie Nichols, a host and server at the Corner Drafthouse, in San Diego, loves her job, calling herself “a textbook people pleaser.”

“I’m always wanting to make sure the customer feels welcome and taken care of,” she said. “And nothing makes me happier than thinking I’m a source of light in a dark time.”

Ms. Nichols said that she was proud of her team for enforcing safety protocols, but that she and her colleagues suffered backlash for it, too, making their work environment more challenging. “We got people who’d yell at us, who’d curse at us, who’d call us stupid for wearing masks,” she said.

Khushbu Shah wrote for Food & Wine about the harm done to restaurant workers by entitled customers, and it’s been hard to keep up with the reports of hostile diners. A recent story out of Houston was particularly chilling.

Last month, after Gov. Greg Abbott lifted some statewide mandates, including mask-wearing, many restaurants continued to enforce the rule, recognizing that most of the population still wasn’t vaccinated. Among them was Picos, a family-run Mexican restaurant in Houston. Customers reacted by sending threatening messages to the family through social media: If they weren’t allowed in the dining room without masks, they’d call the U.S. Immigration and Customs Enforcement to deport workers.

This incident points to the profound dysfunction at the heart of the American hospitality industry, which routinely devalues the labor that runs it, and often diminishes the people who make restaurants worth going to in the first place.

Before hospitality was a business, it was more of a virtue — a barometer of civilization. And in light of the past year, and the extreme hospitality expected from workers during a global pandemic, it might be helpful to think of it that way again.

Ancient ideas of hospitality were in place to protect pilgrims, travelers, immigrants and others who looked to strangers for food and shelter on the road. At the root of hospitality is the Latin word “hostis.” It means guest, but also enemy. The story of Picos reveals just how fine that line can be.

Writing about the ethics and politics of hospitality, the philosopher Jacques Derrida claimed that “unconditional hospitality is impossible.” It’s never been reasonable to expect infinite generosity, but that idea has still shaped the industry in countless ways, now widely accepted as the only ways that restaurants can function.

For fear of losing customers, chefs underprice dishes on their menus. They rely on predatory third-party delivery apps, which eat away at already razor-thin margins, because customers find them convenient.

Prep cooks and dishwashers clock out of one restaurant job and head to a second, but still can’t piece together a living wage. Servers rely almost entirely on tips because the minimum wage is so low. Cooks put themselves at risk because their health care is tied to their employment. Diners recognize that workers in the kitchen may be undocumented, and use that to leverage power.

It’s no wonder that, as restaurants try to staff up, there’s a national shortage of workers.

This is American hospitality at its ugliest, and a reminder of the inequities at its roots. After slavery was abolished in 1865, employers looking to get away with not fairly paying service workers, particularly those who were formerly enslaved, encouraged tipping instead.

Tipping originated in feudal Europe, and while it gradually became less popular there, it’s only become more critical for service workers in the United States, whose wages still depend on the whims of diners.

In December, as tipped workers returned to work in dining rooms across the country, the UC Berkeley Food Labor Research Center reported that while tips had drastically declined with the pandemic, sexual harassment from diners had increased. On top of that, workers feared enforcing safety protocols like wearing masks and distancing.

Ms. Cohen, of Dirt Candy, has called tipping an inherently racist and sexist system. She switched to a no-tipping model in 2015, increasing menu prices and making wages more equitable among the kitchen staff and servers.

While some restaurateurs, including Mr. Meyer, have since moved away from a no-tipping model, Ms. Cohen feels more committed to it than ever. “Tipping leaves you so incredibly vulnerable,” she said. “And after this past year, how can we ask our employees to feel that vulnerable again?”

Service may work one way, flowing from staff to diners, but hospitality reciprocates. At its best, it should bring a sense of safety and well-being to those dining and to those working.

The art critic John Berger often talked about hospitality as necessary to his understanding of art and culture, to the act of storytelling, to being human. Hospitality, to him, was a continuous and conscious choice — to listen, to be kind, to be open. If an exchange relied on someone’s exploitation? That wasn’t hospitality at all.

Reimagining hospitality with this in mind could reshape the industry, making it a safer, fairer place to work, with higher wages, comprehensive benefits and stronger support systems for workers. It may also make more room for employee-owned restaurants, unions and community-driven models.

At Be U, a tiny Vietnamese restaurant that Uyen Le opened about two months ago in Los Angeles, all workers start at $18 an hour. “I come from a background of labor rights,” said Ms. Le, “and I just believe that for the amount of skill and work it takes to do this kind of job day in and day out — honestly, I think $18 an hour is low.”

Tips are pooled, then shared equally by cooks and servers. “We’re just a little takeout restaurant, but it comes out to an additional $3 to $5 an hour per worker,” said Ms. Le, who immigrated from Vietnam in the 1990s. She is one of many chefs making small but meaningful changes.

Ms. Lipscombe, who came to the restaurant business with a background in architecture and city planning, worked to connect locals to farmers, and started programs to feed those in need, including a buy-one-give-one dinner series.

During the pandemic, she said, people bought gift certificates from her, then donated them back to the restaurant, or brought in envelopes of cash, trying to help however they could. These gestures from diners made her fight harder to keep the restaurant afloat.

From the start, Ms. Lipscombe said, she wanted the restaurant, and its entire team, to be part of the fabric of the community.

“We’re not trying to reach for a Michelin star or a James Beard award,” she said. “It’s a different kind of hospitality.”