A ham and jam sandwich offers sweet, savory and salty bites, and more ideas for lunch. 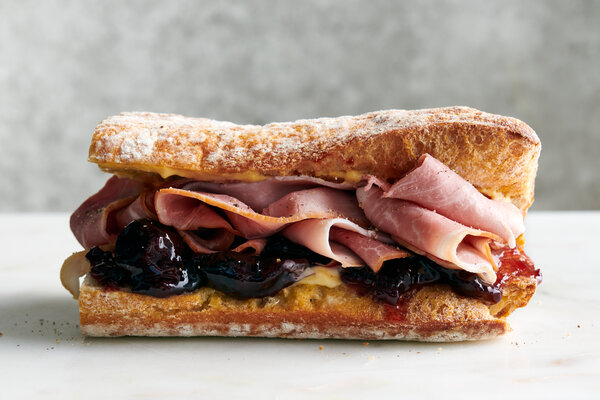 Good morning. For a bunch of mornings now, I’ve been adding a smear of marmalade to my buttered breakfast bagel and sliced hard-boiled egg, with a sprinkle of kosher salt. I like the hint of sweetness against the egg and salt and bread.

Accordingly, I was thrilled to see Ali Slagle’s new recipe for a lunchtime version: the ham and jam sandwich (above). It’s an expansion of the Parisian sandwich known as jambon-beurre: a split baguette with jam for sweetness, ham for salt and Dijon mustard and black pepper for a little heat. Won’t you give that a try?

Also in the midday realm, I like Naz Deravian’s new recipe for borani-yeh esfenaj, an Iranian spinach yogurt dish, which makes for a delicious lunchtime dip with toast, or as an accompaniment for rice. (More lunch ideas: an Italian-style tuna sandwich; a superior egg salad sandwich; sardine toasts with tomato and sweet onion or a quick tomato soup with grilled cheese.)

Which brings us inexorably to dinner. You might give this slow-cooker shrimp in purgatory a try. If you work from home, set the sauce up after lunch and let it burble along pleasantly all afternoon, then add the shrimp right before serving. If you’d prefer to move faster, there’s always spaghetti with fried eggs, a four-ingredient meal that punches well above its weight.

How about one-pot chicken and rice with ginger and cumin? I like the golden raisins in there so much.

Or you could make a cast-iron steak, which uses a technique that my father used for hamburgers when I was growing up: You salt the pan rather than the meat, and then flip the steak every 30 seconds or so over very high heat until it develops a serious golden crust. It’ll be medium-rare in about 4 minutes, but check the temperature with that instant-read thermometer I’m always telling you to buy. You want the steak at about 120 to 125 degrees, and the temperature will continue to rise as it rests. (Bonus points if you do this while drinking a bourbon and branch water, and hossing me about my homework.)

And maybe serve it with these smashed potatoes with Thai-style chile and herb sauce?

There are thousands and thousands more recipes to cook right now waiting for you on New York Times Cooking, and inspiration to spare on our TikTok, Instagram and YouTube accounts. You need a subscription to access them. We’ve talked about that before, I think. Subscriptions support our work and allow it to continue. It you haven’t already, would you consider subscribing today? Thank you.

We can help if you run into problems with that, or with our technology. Just drop a line to [email protected] Someone will get back to you.

Now, it’s nothing whatsoever to do with rhubarb or strawberries, but Jill Lepore on bicycles is delicious reading. That’s in The New Yorker.

In The Atlantic, Kaitlyn Tiffany wrote about why the viral online challenge is never coming back.

In a recent newsletter, I made note of an annual boats-with-no-motor run up the Inside Passage from Washington State to Ketchikan, Alaska. A subscriber just put me on to Zach Carver’s 2020 documentary, “The Race to Alaska.” Here’s the trailer, and it delivers.

Finally, André De Shields played his last performance as Hermes in “Hadestown” last night on Broadway. Here he is accepting his 2019 Tony Award for best actor in a musical. Enjoy that, and I’ll be back on Wednesday.