One of our many plans dashed because of the pandemic was a long-anticipated family vacation to the Alps.

We had it perfectly arranged: a weeklong extravaganza of vigorous hiking by day, offset by butter-filled feasting at night (and as many spa visits as I could fit in between).

When we canceled the trip, I vowed to fill my at-home vacation with as much Brooklyn “hiking,” bathtub spa-ing and Alpine-style feasting as was humanly possible.

And that was when I fell in love with tartiflette.

A glistening, golden-topped casserole from the French side of the Alps, tartiflette is traditionally filled with velvety potatoes and bits of brawny pork lardon, seasoned with sweet onions and cream. As a crowning touch, a small wheel of Reblochon cheese is tucked in among all that richness, so its insides can melt into a gooey puddle while the rind that pokes out on top crisps at its edges. 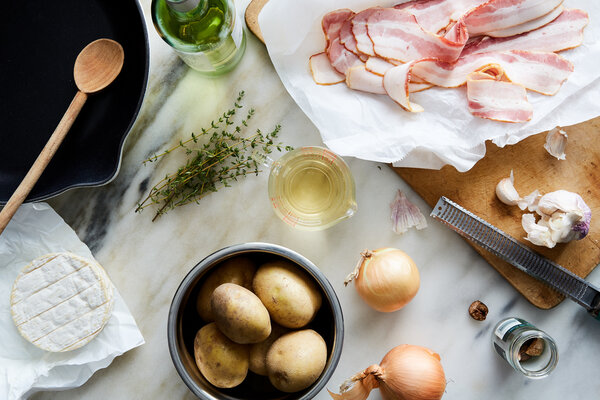 It’s not light fare, but it’s not supposed to be. Meant to fortify the body after a day of downhill skiing and other strenuous outdoor endeavors, it got me through many an icy walk in the wilds of Prospect Park.

The first time I made tartiflette, I followed a fairly traditional recipe, with one exception. Reblochon, the soft, creamy washed-rind cow cheese, is hard to track down in the United States. I substituted Camembert, which turned out beautifully; any creamy cheese with a bloomy, edible rind should work equally well.

I tweaked the technique for my next round of testing, streamlining the entire process from three separate pans to one 10- to 12-inch ovenproof skillet with a tightfitting cover. If you don’t have a large enough skillet, a 5- or 6-quart Dutch oven will also work. Just note that because of the greater depth, the cheese may not become quite as bronzed. It’s a small quibble but one worth mentioning in case you were counting on those crackling bits of brown butterfat speckling the surface.

I like to serve tartiflette with a tangy salad of winter greens to cut the richness. Some bracing mix of radicchio, endive, escarole, watercress or arugula is ideal, maybe with a sliced ripe pear thrown in for a touch of sweetness.

Accompanied by a bottle of good wine, a plateful of tartiflette did, temporarily, fill the void of a lost vacation, and gave me something to look forward to when I can travel again.