Home » World News » Which countries are screening at airports? 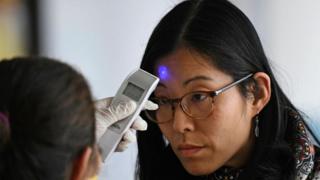 Countries around the world are taking different measures to try to stop the spread of coronavirus.

By far the most cases have been in China – other countries are at different stages of the virus.

What have they been doing to try to get to grips with the disease?

Some countries are screening at airports and other transport hubs – and some are not.

Public Health England said it had introduced “enhanced monitoring” for passengers arriving from countries such as China, Iran, Japan and Malaysia, but not temperature checks.

“Expert advice suggests clinical entry screening (for example, through temperature checks) would be of very limited effectiveness and detect only a small minority of cases,” it said.

“This is because symptoms do not usually appear until five to seven days, and sometimes up to 14 days.”

The enhanced monitoring means having medical staff at airports to meet direct flights from hot spots, giving information about symptoms to passengers and encouraging them to say if they are feeling unwell.

Recent academic research ran simulations that suggested temperature checks at airports would catch just over half of coronavirus-infected passengers.

Airports in Italy have been running temperature checks on passengers since early February, and there are also tests at railway stations. Thermometers are a common sight at airports throughout Asia.

The US is not allowing foreign nationals into the country who have visited either China or Iran in the last 14 days.

Passengers arriving at the 11 US airports, to which all flights from China have been directed, are being screened for fever, cough, and shortness of breath.

The Centers for Disease Control (CDC) has also recommended that people with underlying health issues defer all cruise-ship travel worldwide.

The UN’s educational, scientific and cultural body Unesco says 14 countries have nationwide school closures, while another 13 have closed some schools.

Schools have been closed for different lengths of time. Japan, for example, has asked all schools to close until the end of the school year, which is in late March.

It announced the policy on 27 February, when there were 186 confirmed cases in Japan.

Italy has closed all its schools until 3 April. It announced the initial closure on 4 March when there were 2,500 confirmed cases in Italy.

Spain has closed all schools and universities in the Madrid region.

In the UK and Germany, a relatively small number of schools have been closed temporarily to allow for deep cleaning after staff or pupils tested positive or returned from high-risk areas.

France closed nurseries and schools for 15 days from 9 March in the two areas most affected by coronavirus – Brittany and the Oise region north of Paris.

A range of sporting events have been cancelled or played in empty stadiums.

Rugby Union’s Six Nations matches due to be played on 14 March between Italy and England and between France and Ireland have been postponed.

The Indian Wells tennis tournament in California was cancelled after a public health emergency was declared for the Coachella Valley. It was called off shortly before qualifying matches were due to start on 9 March – the full tournament was supposed to begin on Wednesday.

In Greece, the government has announced that all professional sports events for the next two weeks will be played without spectators.

The Barcelona Marathon has been moved from 15 March to 25 October.

The Italian Football League has suspended all games until 3 April, the Swiss Football League has been shut down until 23 March and a host of other football matches, especially ones between teams from different countries, have been played behind closed doors.

Meanwhile, Japan’s Olympics Minister Seiko Hashimoto has said everything is being done to allow the games to go ahead on 24 July.

But he added that the contract with the International Olympic Committee would allow the games to be delayed until later in the year, if need be.

Some of the world’s most famous visitor attractions have closed, restricted entry or told visitors to minimise close contact with each other.

The huge Disney resort in Shanghai only partially re-opened on Monday after being closed for more than a month. But Hong Kong’s Disneyland remains closed as do Disney theme parks in Japan.

Museums and attractions have also shut in other countries in Asia.

There have also been temporary closures of tourist sites across Italy under the restrictions announced by the government. In Rome, the Coliseum and other attractions are closed until 3 April.

In France, the Louvre museum in Paris shut earlier in March over staff fears about the possible spread of the virus. It’s now re-opened, but is asking visitors not to come if they feel unwell or are travelling from an infected area.

The Eiffel Tower is asking visitors to use only bank cards to pay or buy tickets online. Disneyland Paris remains open, although a member of staff there tested positive for the coronavirus over the weekend.

Saudi Arabia temporarily halted the entry of pilgrims wanting to visit the holy sites, and Iraq introduced restrictions on access to religious sites.

Restricting movement is the other measure some countries are trying, looking to the example of China where there were large-scale restrictions.

There will be checks on roads and at airports and railway stations.

These measures have only just come into force so it’s too early to say how effective they might be.

Iran has limited travel between major cities, with non-residents being stopped from entering. But the government has not sealed off the holy city of Qom, which was one of the places worst hit by the disease.

This has met with criticism. The deputy speaker of parliament, Masoud Pezeshkian who is himself a doctor, said: “If I were the minister of health, I would have quarantined Qom on the first day.”

On Tuesday, Iran reported 54 deaths in the previous 24 hours – the highest toll for a single day since the coronavirus outbreak started there.

In South Korea, the authorities have quarantined two apartment blocks in the southern city of Daegu, which has about three-quarters of the country’s cases. Many members of the Shincheonji Church of Jesus, the religious group at the centre of the outbreak, live in the complex.

In North Korea, the government quarantined 380 foreigners – mainly diplomats and staff in the capital Pyonyang – for more than a month in their compounds.

Send us your questions