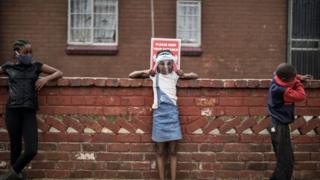 As coronavirus infections surge, at ferocious speed, across South Africa, I’ve spent the last couple of weeks driving through this huge country trying to understand where and why things are going both right and wrong.

Here, in seven points, are some early conclusions and, perhaps, some more lessons for the rest of the continent.

Be wary of statistics, even here in South Africa, which has some of the best data collection on the continent.

And be even more wary of anecdote-based assumptions.

Some observers have rushed to celebrate figures appearing to show an impressively low fatality rate for Covid-19 patients in the country – 1.4% compared with 15% in the UK. Could it be because of a relatively young population? Or perhaps Africans enjoy some special immunity, genetic or otherwise?

The short answer is No. Or rather, it’s still far too early to tell.

If you compare, for instance, fatality rates for confirmed virus patients in South Africa’s major hospitals, they are almost exactly the same as those in Italy or the UK.

But when you broaden the statistical pool beyond hospital admissions, then every country and every province is using fundamentally different criteria and different methods.

He points out that so little testing is happening across the rest of the continent that it is impossible to draw any useful conclusions or comparisons. His hunch is that – as with the Swine flu pandemic of 2009 – we will only know the virus’ true impact in Africa in several years.

Staying on the issue of statistics, South African researchers have published alarming data about 17,000 excess deaths which appear to show significant under-reporting of fatalities from Covid-19 here.

As the researchers point out, a growing fear of going anywhere near hospitals or clinics – not unfounded in some places – may well be a significant factor.

This means that many people with the virus are dying at home, while others are succumbing to different diseases rather than seeking treatment.

Testing for TB has, for example, declined by about 50% in recent weeks, and there has been a 25% reduction in immunisations in South Africa.

The solution? There’s no quick fix to this, but local health departments need to do a better job of working with their communities, to build trust both with patients and with staff who have often reacted to new infections and potential exposure by, for instance, closing down entire clinics for weeks.

In Port Elizabeth, a giant new coronavirus “field hospital” has been built by the private sector. But, as of last week, only around 30 of its 1,200 beds were being used because of a shortage of essential staff and oxygen.

“Brainless,” said Professor Madhi, dismissively when talking about the hospital.

The provincial government in Gauteng has built something but again, hardly any of the beds are either staffed or have oxygen supplies, leaving the facility almost empty, and prompting volunteers and private donors to step in to try to rescue the situation.

“Oxygen is the new currency,” one doctor told me, complaining that more than half of the facility remained “a white elephant” and that plans to add another 700 beds would be a complete waste of time and money if the local government did not ensure additional oxygen supplies and hire the medical staff required.

“The storm is upon us,” said President Cyril Ramaphosa last week, and his choice of weather metaphor was apt. After all, wars – the virus analogy favoured by many global leaders – tend to end, whereas the weather will always be with us and so, perhaps, will this coronavirus.

In the absence of a vaccine, herd immunity, or significant behavioural change, several experts have told me they believe South Africa may have to treat Covid-19 the same way it has handled TB (which still kills some 200 people every day here) and HIV, and learn to live with the virus on a long-term basis.

Plenty has been written about the energetic, generous, and sometimes effective role played by South Africa’s private sector in helping to tackle the virus. But, as usual, it is local communities and small organisations which make the most difference in such crises, and which are all too often overlooked.

Doctors in Cape Town told me that it was the clinics that enjoyed the closest long-term relationships with local communities and understood how to communicate with them.

The Cape Town Together Facebook page is a good portal through which to explore the kinds of grass-roots work that is thriving during the lockdown – the Community Action Networks, for example – and which may yet help to reconfigure one of the world’s most unequal, and siloed societies, once the immediate storm has passed.

It was a revealing moment. In the midst of this health crisis, powerful figures in South Africa’s governing ANC were caught pushing to reinstate two senior figures who had been implicated in one of the most egregious corruption scandals of the country’s democratic era – the looting and collapse of the rural VBS bank.

It was a sobering reminder of the institutional rot within the ANC, where competence and honesty are sometimes valued less than party loyalty, and where a culture of “cadre deployment” has left some key state institutions – hospitals and health services, for example – managed by unqualified party hacks.

“If you don’t have robust management systems, you can’t change the situation overnight, during a pandemic,” one senior doctor in Johannesburg complained to me, arguing that Gauteng’s provincial health department was almost as incompetent as the Eastern Cape’s.

In the aftermath of this crisis – and I remember something similar being revealed on a village-by-village basis following the Asian tsunami – the quality of local leadership seems likely to be a defining factor in distinguishing between the successes and the failures.

As the UK agonises over the specifics of when and where and how to wear masks in public, it is encouraging to note how quickly, and relatively obediently, South Africans have knuckled down to the business of face-covering.

Yes, there are huge and growing frustrations here, not least in the hospitality and alcohol industries, as they wrestle with the implications of the government’s sometimes erratic, contradictory lockdown rules.

For instance, why can passengers squeeze onto a minibus but people not eat in restaurants?

But many doctors here seem convinced that masks will prove to be the single most important step in tackling the virus, particularly in crowded townships, where social distancing is a near impossibility.