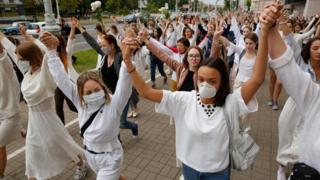 Women have formed human chains in Belarus to condemn a crackdown on protests over the disputed election.

Many dressed in white and carried flowers as they called for an end to police brutality.

Thousands of people have been arrested and at least two have died.

In the latest official figures, the interior ministry said police had detained 700 people during protests on Wednesday, bringing the total number to 6,700.

Some detainees were released on Thursday. Tearful relatives have been gathering outside a jail north of the capital Minsk, hoping to be reunited with their loved ones or for information on their whereabouts.

As a fifth day of protests got under way, hundreds of women formed “solidarity chains” in Minsk. Participants told reporters they wanted a peaceful resolution, as they called for all detained protesters to be freed.

It was the second day in a row that women in Minsk had organised such action. Similar scenes were also reported elsewhere in the country.

She was one of three women who pooled their resources to spearhead the opposition. The other two have left the country.

Veronika Tsepkalo fled Belarus on the day of the vote while the main opposition candidate in the election, Svetlana Tikhanovskaya, was briefly detained on Monday before fleeing to Lithuania.

An associate said Ms Tikhanovskaya was escorted from the country by the authorities as part of a deal to allow the release of her campaign manager, who was arrested on the eve of the election.

Ms Tikhanovskaya, 37, released a video saying she made the “very difficult decision” to leave because of her children.

The opposition candidate was a stay-at-home mother until she entered the race after her husband was arrested and blocked from registering for the vote.

She became Mr Lukashenko’s toughest opposition challenge in years, leading large rallies in the lead up to the vote.

But Mr Lukashenko dismissed her bid, saying a woman could not lead Belarus.

“Our constitution is not for women,” he said earlier this year. “Our society has not matured enough to vote for a woman. This is because by constitution the president handles a lot of power.”

Mr Lukashenko, 65, has ruled the former Soviet country since 1994. He has described opposition supporters as “sheep” controlled from abroad.

As protests continued on Thursday, some workers organised strikes.

Russian internet giant Yandex said armed individuals had entered its offices in Minsk and barred employees inside from leaving. The company said it was trying to get more information about the incident.

The body of evidence of police brutality, both in the streets and inside remand prisons, is mounting. Detainees include not only opposition activists, but also many journalists and accidental passers-by.

One of the released journalists, Nikita Telizhenko of the Russian Znak.com news website, published a harrowing account of three days inside prison. Now back in Russia, he describes people lying on the floor of a detention centre, piled on top of each other, in a pool of blood and excrement. Not allowed to use the toilet for hours on end or even change position.

He says he saw seriously injured people, with broken limbs and severe bruising, not only left without medical help, but kicked and beaten by the guards more.

Telizhenko’s testimony is confirmed by countless posts on social media – photos, videos, stories. I spoke to an American woman who was visiting her Belarusian boyfriend in Minsk – he got detained for no apparent reason. Not only had he not been protesting, but he was asleep in bed when the police came to his flat, kicked down the door and took him away.

What else has been happening?

Election officials said Mr Lukashenko won 80% of the vote on Sunday, but protests erupted amid widespread allegations of vote rigging. The result was condemned by the European Union as “neither free nor fair”.

Hundreds of people have been injured in a police crackdown on protests, some seriously. A BBC crew was attacked by police on Tuesday evening.

Officials have confirmed the deaths of two people.

One demonstrator died during a protest in the capital Minsk on Monday. The Belarusian interior ministry alleged an explosive device had gone off in his hand.

Also a 25-year-old man died in the south-eastern city of Gomel on Wednesday. The Belarusian Investigative Committee said he was arrested and sentenced to 10 days in prison for taking part in an illegal protest, but died after being taken to hospital because he was feeling unwell.

The protester’s mother told Radio Free Europe that her son had not taken part in any protests and was arrested as he was going to see his girlfriend. She said he had heart problems and was kept for hours in a police van.

People have been shouting the words “get out” from their balconies, the same slogan used by protesters on the ground. Police responded by firing rubber bullets.

The United Nations has condemned the use of violence by authorities.

Video footage shared on social media has shown ex-special forces officers throwing their uniforms into bins in disgust at the actions of their former colleagues.

“I was proud of the unit I served [in]. Now I am ashamed. Shame on everyone who follows such orders,” one former officer said.

Staff in some factories and academic institutes have gone on strike, demanding an end to the violence and calling for Ms Tikhanovskaya to be recognised as the winner.

People at Belaz factory that went on strike were giving out leaflets to the workers. It feels like it is 1917 Bolshevik revolution time when with no Internet ppl were mobilized thru spreading leaflets and giving speeches at factories #Belarus

Others who have not gone on strike have held meetings with their managers to voice their anger at the election result and police crackdown.

The protests are unprecedented in their scale as people in dozens of cities, towns and even villages rise up and call for the main opposition figure, Svetlana Tikhanovskaya, to be recognised as the winner of Sunday’s presidential election.

I watched as young men and women ran for safety past my windows, taking a break from the clashes and then returning to face the police.

My women neighbours are trying to stop their sons and husbands from joining the nightly protests, worried for their safety.

Some 7,000 people have been detained and you don’t have to be protesting to be arrested. My friend’s son, a university lecturer, was detained randomly before the elections and spent three days in a cell.

The interior ministry insists its measures are “adequate” and points out that more than 100 police have been injured and 28 treated in hospital. There have been deliberate attempts by drivers to run over traffic police and “law enforcers have used weapons” to stop them, it says.

People here are angry: with police, authorities and above all President Alexander Lukashenko. No-one I have spoken to has any support for what police are doing.