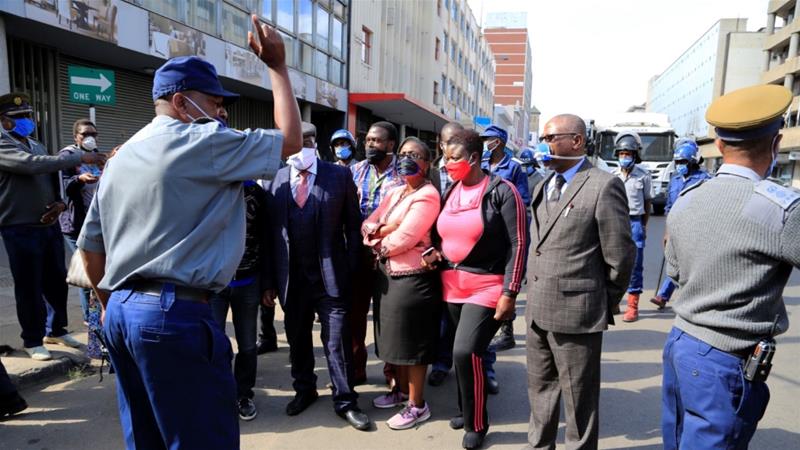 Police in Harare have arrested several top officials of Zimbabwe’s main opposition party after they attempted to enter its headquarters, which is being occupied by members of a splinter faction.

The Movement for Democratic Change (MDC) has been divided since the Supreme Court ruled on March 30 that Nelson Chamisa was not its legitimate leader and installed Thokozani Khupe, head of one faction of the party, to lead it in the interim.

Most MDC members still regard Chamisa as their leader and accuse President Emmerson Mnangagwa’s government of siding with Khupe’s faction in the battle for control of the movement.

Supporters of Khupe seized control of the party’s offices at Harvest House in central Harare late on Thursday while police watched, a video of the incident circulated by the MDC showed.

Anti-riot police on Friday cordoned off the building, which has stood as a symbol of the MDC’s fight against Mnangagwa’s ruling ZANU-PF party for the past 20 years

“We are the rightful owners of the building and you have had no court order to stop us from entering,” Biti, who was finance minister from 2009 to 2013 during a period of power-sharing, told the police officers blocking their way.

“We acquired this building in 2002. Everyone knows that, so you cannot deny our workers the right to use this building,” he said.

He and four other MDC officials were arrested and transported to a police station in a truck. It was not immediately clear what charges they would face.

Chamisa, 42, says his party is different from Khupe’s outfit after it contested elections in 2018 under the name MDC Alliance while Khupe’s ran as the MDC-T party.

Chamisa narrowly lost those elections to Mnangagwa. He says he is being persecuted for refusing to recognise the president’s disputed victory while Khupe accepted the results.

Chamisa’s MDC accuses Mnangagwa’s government of eroding political rights under the cover of Zimbabwe’s coronavirus lockdown, which includes a ban on political protests.